Mazen Zari, JCCT’s Co Founder, acting VP and Director of Operations in collaboration with other team members decided to try text messaging and contacted Mosio to design and implement a text messaging campaign to recruit and enroll patients in a vaccine clinical trial. Zari was blown away by the results. During the first eight weeks operation, Zari sent 1,541 text messages, screened 795 patients and enrolled 265 patients.

Upon further analysis, Figure 1 confirms that the increase in text messages also increased enrollment rates, and Figure 2 verifies that there was a statistically significant relationship between text messaging and patients enrolled. 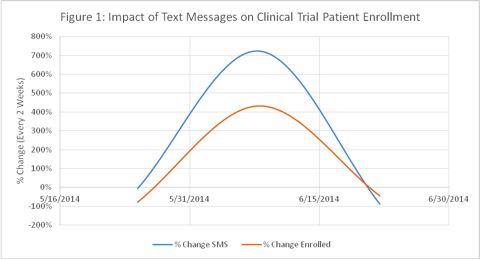 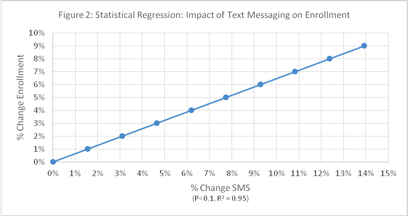 These outstanding enrollment results exceeded the sponsor’s expectations for JCCT’s enrollment potential, as the sponsor requested JCCT to halt enrollment three times during the eight week timeframe. The sponsor allowed JCCT to continue enrollment for an additional three weeks, and JCCT enrolled a total of 338 patients.

“We had an amazing response! The minute we sent the text, we would immediately get a lot of calls. It was not double, not, triple, but five times the response, even with less people contacted (compared to e-mail),” said Zari. “We were initially concerned that patients weren’t going to find text messaging useful, but on the contrary, patients really liked it!” added Zari.

This case study indicates that text messaging has demonstrated to be an effective tool that can be used to engage patients for clinical trial recruitment and enrollment.

[1] Symantic – The State of Spam and Phishing 2009, Mobile Marketing Association